Crochet v Knitting - who is the heavyweight?

Is the urban myth that crochet uses more yarn than knitting true?

As a relatively new crocheter (almost two years) there are certain facts that have been passed on to me.  One such fact is that crochet uses more yarn than knitting.  Now, I'm not normally one to swim the tide with the other fish - I generally like to make my own mind up about things and I like facts, especially if I have done the work behind my understanding.  For some reason I took the fact that crochet uses more yarn than knitting as gospel.

I can't really trace why it was that I decided to look at the evidence behind this, but it is probably because of my work on The Crochet Circle Podcast that made me want to dig into this topic further.

So, I thought back to my Standard Grade Chemistry and Physics exams and pondered what the best methodology would be.

Initially I created tensions squares in two different yarn weights and when they were finished and the results were in, I had a look around to see how others had tackled this topic.  There were a few different approaches and some were similar to my methodology.  One of the questions asked was whether there was a difference in lace weight yarns also.  If you have listened to Episode 4 - A Crochet Journey of The Crochet Circle Podcast, you will already understand my new found utter dislike for using small hooks and needles.  But, being a conscientious sort of a person, I also created tension squares in lace weight (grrrrrrrr with a bit more grrrrr on the side!).

Here is what I crocheted and knitted with: 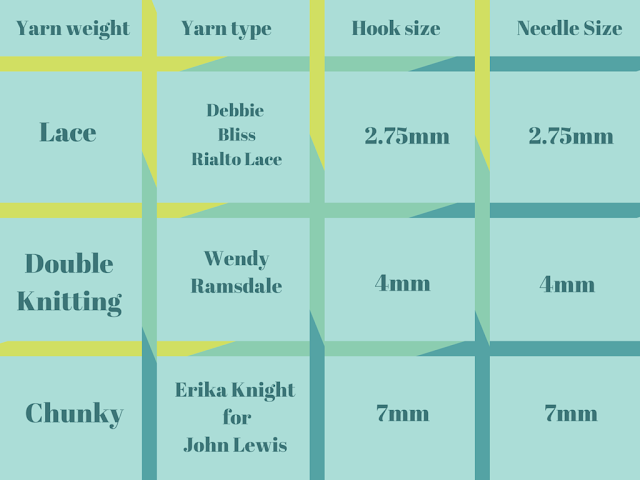 For each of the above weights I knitted a tension square in stocking stitch and one in garter stitch. For crochet I created squares in double, half treble and treble crochet and cut their tails to the same lengths (2.5cm).

As hard as I tried I couldn't make exact 6" by 6" squares but that was taken into account when I was working through the methodology. 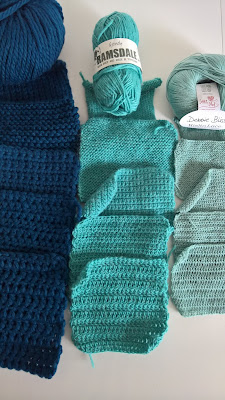 So, I have 15 tension not-squares ready to measure and weigh.  My good kitchen scales can measure down to one tenth of a gram and the dimensions (width and length) of each square were measured to a millimeter.

I plugged all of the weights, widths and lengths into my excel spread sheet and applied the following logic:

The results are below for each yarn weight: 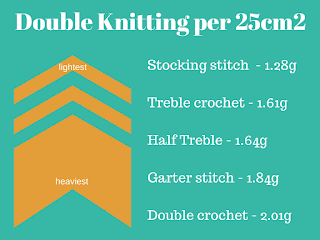 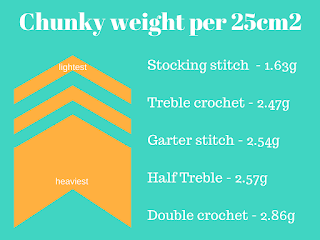 I also looked at the average (across all three yarns weights) percentage increase of yarn used per 25cm2 for the following:

Given that treble crochet is consistently the next lightest stitch to use, I applied the same logic as above using treble as the baseline:

It is a gross generalisation to say that crochet uses more yarn than knitting.  If you look at some of the other reviews that I have linked to you will see quotes of three times the amount!

Three results were consistent throughout my study.  Stocking stitch was the lightest, treble crochet was next and double crochet was always the heaviest.

There is very little in it between garter stitch and half treble which is why the position of those varies across the three yarn weights.

At the heart of this though, what I am really hoping for is that crochet isn't seen as the heavyweight between the two crafts.  If this also encourages crocheters to look to buy yarn with a higher wool content then even better.  I suspect that some crocheters use acrylic because it has been ingrained in them that crochet uses more yarn and is therefore a more expensive hobby than knitting.

Anything that encourages the use of renewable materials such as wool rather than synthetic fibres derived from fossil fuels is always going to get the thumbs up from me!

2 - Tension changes from day to day. I created each of the five squares for each yarn weight on the same day over the course of three days (DK, then chunky, then lace weight (grrrr)) to try to ensure that my tension was as even as possible.   I couldn't find a better way around this.

Links to other approaches on crochet v knitting weights:

Here is how the lovely Joanne Scrace of Not So Granny approached it - http://notsogranny.com/2014/07/does-crochet-really-use-more-yarn-than-knitting.html

I found this Compile Yarn blog that uses a stitch count methodology and creates similar results to my test - http://compileyarn.blogspot.co.uk/2012/03/knitting-vs-crochet-does-crochet-really.html

And I also quite liked this approach which also looks at Tunisian crochet - http://thing4string.blogspot.co.uk/2007/01/unraveling-truth.html Jog-free Sock Stripes & Getting Two Pairs of Socks from...

Dealing with moths in your stash/woollens > Provenance Craft Co. > Blog 4

Dealing with moths in your stash or woollens Luckily, I...